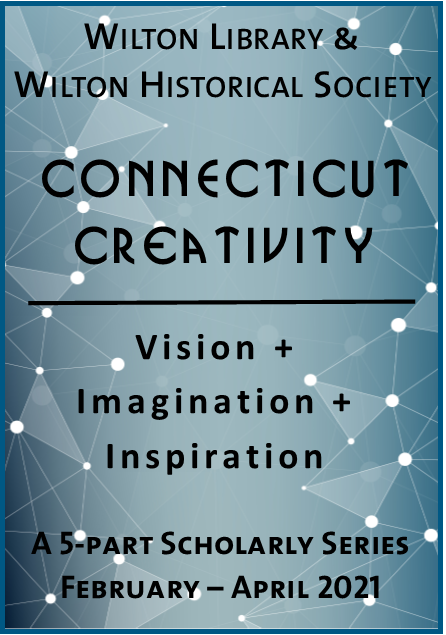 Gillette and Holmes: Theatrical Innovation from Connecticut to London and Back Again – Emily Gifford

In the 14th year of the collaboration between Wilton Library and the Wilton Historical Society, the scholarly lecture series will focus on the theme of “Creativity in Connecticut”. In this lecture, Emily Gifford will explore William  Gillette, a colorful Connecticuter whose contributions to global popular culture have persisted for over a century.

The program is sponsored by Phil Lauria and Elaine Tai-Lauria. The moderator is Steve Hudspeth. Online registration is required in order to receive the Zoom invitation link.
This program is being hosted by the Wilton Historical Society. No charge but a $10 donation to the hosting institution is suggested. Click here to donate.
A lean man in a Victorian traveling coat, deerstalker hat on his head and a curved pipe in hand . . . these items are universal shorthand for Sherlock Holmes, Consulting Detective. But those iconic symbols had less to do with Sir Arthur Conan Doyle's creation than with Connecticut actor William Gillette's stage portrayal of Holmes. Gillette, from a prominent family in Hartford's Nook Farm, enjoyed early success in the theater as an actor, playwright and director. He also made advances in sound effects and pioneered the use of new lighting technologies to enhance storytelling, such as the dramatic use of lighting blackouts. It was "his" Holmes, however, which brought him the most recognition, as well as financial rewards. Gillette used some of his income to create a wonderfully eccentric castle overlooking the Connecticut River, a residence as ingenious as any Holmes could have imagined.