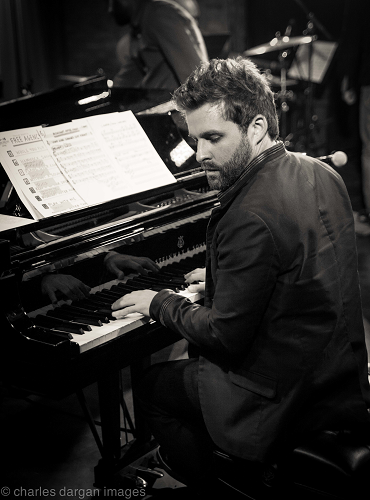 On International Jazz Day 2021, please join us for our first Hot & Cool jazz concert since our 2019-2020 season was interrupted after the smashing two-set concert of Brubecks Play Brubeck in January 2020!
We will be broadcasting a spectacular concert performed by pianist Taylor Eigsti and recorded in front of a live [socially distanced!] audience last winter at Millstone – then the long-time home of jazz legend Dave Brubeck. Indeed, Taylor works his magic on Dave’s grand piano in the dramatic two-story music room where Dave composed so much of his famous music. As a bonus, Wilton resident Chris Brubeck, an award-winning composer and superlative trombonist and bassist, will also sit in and jam with Taylor on a few tunes. This will be a very special one-time concert broadcast that you won’t want to miss since the recording will not be accessible after this special evening.
You’ll notice a few changes as we’ve adapted to our partially locked down world. First of all, you’ll need to provide your own wine and cheese! Second, you’ll see that we are charging a non-refundable $20 fee per “ticket” [the Zoom invitation link] that is part of the registration process. As you might imagine, between the audio and video specialists on site for the concert and the post-production editing and polishing, this was a significantly more expensive project compared to our live, onsite Hot & Cool concerts in the library. In addition to your support, this concert event was made possible through the generosity of an anonymous donor.
New York-based pianist and composer Taylor Eigsti started playing the piano when he was four years old and was quickly labeled a prodigy. He has since released 7 albums as a bandleader, in addition to appearing on over 50 albums as a sideman. In 2007, he performed in the Brubeck Room in one of the first Hot & Cool Jazz concerts. On May 21, 2021, Eigsti will be releasing his eighth album as a leader (and his first brand new album in 11 years), called Tree Falls on GSI Records. For more information, please visit Taylor's website: www.tayjazz.com/
Taylor has garnered multiple individual GRAMMY Award nominations over the years for his work as a recording artist and composer, including Best Instrumental Composition, and Best Jazz Instrumental Solo. Over the past 30+ years, Eigsti has had the good fortune of performing, touring or recording with such luminaries as Dave Brubeck, The Brubeck Brothers, Joshua Redman, Sting, Chick Corea, Marian McPartland, Chris Botti, David Benoit, McCoy Tyner, Becca Stevens, and Joe Lovano. With his trio and quartet, Taylor has performed at many premiere venues throughout the world, including the Hollywood Bowl, Carnegie Hall, Red Rocks Amphitheater, Massey Hall, Lincoln Center, and many top festivals including the Monterey Jazz Festival and the Newport Jazz Festival.
In addition to leading and performing with various small ensembles, Eigsti frequently has had the opportunity to solo with, compose for, and orchestrate music for various symphony orchestras, and has written an extensive repertoire of music for orchestra and jazz ensemble, such as the New York Philharmonic, New York Pops, and the Chicago Symphony.

Please note that payment is required for complete registration.